Get fresh music recommendations delivered to your inbox every Friday.

from Language of Prairie Dogs 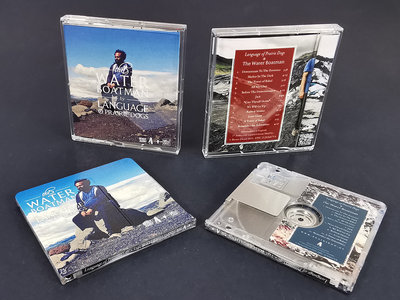 The year is 1999. MiniDisc. MD. It is the format of the future. (Neo uses them in The Matrix!) MDs don't skip, unlike 'portable' CD players. And you can skip straight to the next track, unlike Walkmans. (Walkmen?) And they are stylish and cool and ultra-portable. They even have the track names on a little display on the remote control!

Forget about your weird little MP3 player, Stuart. That'll never catch on. Napster and Audiogalaxy are such a pain in the arse to use, and the pitiful speeds we get on dial-up mean we are stuck trying to download that live recording of Radiohead's Lift for about three weeks.

Instead, get on down to MVC and buy a copy of Kevin Rowland's My Beauty for £22.99! (Member's price: £17.99). Better yet, buy a 5-pack of infinitely re-recordable MiniDiscs and just copy your CDs over. You can even re-order the tracks! That's how Thom Yorke made OK Computer, donchaknow, the greatest album of the last two years!

SMASH-CUT TO: the present. I, Matt Kaufman from Language of Prairie Dogs, <3 MiniDiscs. I still use them. I still buy them, still at insanely inflated prices on eBay. (I paid £24.99 for the album K by Kula Shaker on MiniDisc in 2018. Although that was only so I could dismantle the case to get the dimensions of the artwork for my own purposes.)

In fact my purposes were these: in May 2018 I was speaking to Paul, the creative director of BandCDs.co.uk (the lovely folks who manufacture our CDs and tapes) and I asked him if it would be possible to put our then-upcoming album The Water Boatman onto MiniDisc.

Sony may have killed production of the humble MD in 2013; but I reasoned that someone, somewhere, must still have a MiniDisc-printing machine and old, leftover blank stock which I could put to use.

Paul of BandCDs.co.uk was that someone.

When I casually enquired about MiniDisc production, Paul sprang into action immediately. Being another like-minded fan, he saw a great opportunity for limited runs of the old format. I thought nobody except me cared in the slightest bit about MiniDiscs. I was dead wrong.

Paul told me that unfortunately he couldn't get the familiar dark grey shells for pre-recorded MDs, or the proper old-style larger cases (buying K ended up being a total waste of money on two counts); but he promised that he could get me as close as I was ever likely to get.

SMASH-CUT TO: 18 months later, and I, Matt Kaufman from Language of Prairie Dogs, appear to have accidentally kick-started the worldwide MiniDisc revival. BandCDs' MiniDisc gallery page is now FILLED with examples of musical artists' MiniDiscs. Mark Ronson has a MiniDisc! It's right there in the gallery! (Actually I was in a Mark Ronson music video once, but that's another story for another time.)

Even though I can claim to have had a direct hand in the MD's revival it has taken me a year-and-a-half to actually get around to putting our record onto MiniDisc.

I had hoped to have a MiniDisc, cassette tape and vinyl LP record of a new mix of TWB ready for the 1-year anniversary as a grate joke (I loathe 10th anniversary cash-in expanded remasters - I'm looking at you Pink Floyd and Manic Street Preachers). But there just wasn't any money, or need (still plenty of copies of the CD available, folks).

(I'd also hoped to nominate us for a Grammy nomination in time for the 1-year anniversary edition, so I could have a sticker on the releases which read 'Nominated for a Grammy Nomination,' but The Recording Academy - the people who run the Grammys - and I got into a protracted email battle about whether or not LOPD were eligible to become members in order to nominate ourselves for a nomination. We met all their criteria, but they rejected us multiple times on spurious grounds. Eventually I lost that particular battle. Ah well. Next time.)

The release date of this super limited edition 1st anniversary MiniDisc of our début swansong album is the Eleventh of December. December 11th was Dean Sobers' mum's birthday. It was at her wake that Dean & I resolved to record The Water Boatman, the album we'd been talking about making together since secondary school, back in the '90s. In 2018 we finally completed it, and the record was dedicated to her memory.

This MiniDisc has a Brown Dwarf product code of EPIC 212036875 b - which is nothing to do with Sony Epic, although the MiniDisc is a Sony MD from the final batch of MDs produced in the world…Ever! No, the actual brown dwarf EPIC 212036875 b is described online as "…a rare object that resides in the brown dwarf desert" - being one of the most massive brown dwarfs (dwarves?) ever discovered. Somewhat apt for our smallest release yet, both physically and in terms of run-size. And yet, our most expensive piece of merchandise. Small, but massive, but not quite massive enough to catch fire…

Includes unlimited streaming of The Water Boatman via the free Bandcamp app, plus high-quality download in MP3, FLAC and more.